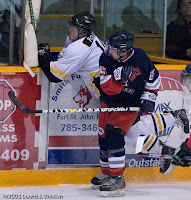 FORT ST. JOHN -- It doesn't matter how much prep you do for a broadcast sometimes things just don't go the way you planned.

Friday night in Fort St. John we didn't even get on the air. Talk about wasted prep! I guess Moose FM had disconnected all the phone lines as they are on a cell phone signal unit. Unfortunately, our station didn't call ahead of time to make sure there was a line. Could be worse I guess. (Not!)

Well as I type this the first period buzzer just went to signal the end of 20 minutes. FSJ leads 1-0 after the first. It was a bit of a strange goal. Goaltender Cody Garnett thought he had the puck covered underneath him but it was loose and the Huskies capitalized.

A bit of a flurry here in the second period. The Canucks have had a ton of scoring chances but fail to capitalize until the 3:34 mark of period 2.

The good times didn't last long. A pair of FSJ goals 11 seconds apart made the score 3-1 Huskies less than five minutes into the 2nd period.

Side note - If anyone is wondering, it is really frustrating to do over the phone updates every 15 minutes and type in between. It'd be nice to be on the air.

Just as I start daydreaming of what it would be like to be broadcasting the Huskies make it 4-1 on a deflection from the blue line.

So I decided to take a jaunt down to the lobby during the intermission and met up with Jr Canucks GM Dwain Hornland and chatted for a bit. Meanwhile the teams hit the ice and DC scores 3 to tie the game. I couldn't believe it!

So just as I was about to leave the booth, again, (this time to check the goal scorers for my stats) the Canucks bury another to take the lead 5-4!

Well this game is turning into a barn burner! FSJ has tied it up late in the third!

The game is over and we're headed to overtime. Very questionable call to end regulation. FSJ captain gave a shot to one of the Canuck players who returns the favour and only one call.. You guessed it, to the Canucks.

OT is underway and what do you know? The Huskies score on the power play 50 seconds in.

I hate when a game ends that way but what can you do? It's hockey.

Well I'm off to catch the bus for the trip back to D.C.. I'll post more in the next little bit including possibly some game photos.

It's going to be a late night. Bus ride to Dawson and then an hour in the car back to Chetwynd. I'm sleeping in tomorrow!