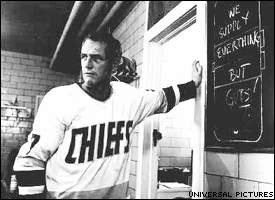 LOS ANGELES -- Tributes poured in for Paul Newman from around the world on Saturday after the Hollywood screen legend and philanthropist died following a long battle with cancer aged 83.

Paul Newman was in his prime before my time so much of his work isn't relevant to this blogger but his role in Slap shot will not be forgotten. Actually I think I'll go watch it now.