Monday morning and suprisingly it was easier to get up than I thought.

I had a chance to take in day one of the conditioning camp at the WCEC on Friday hosted by the Klippers. Walker Wintoneak (son of Klippers' head coach Larry Wintoneak) was in attendance getting a workout in prep for Blades camp. Shayne Neigum was also on the ice getting in shape for Edmonton Oil Kings camp.

Sometime this week I will take a look at possible Klippers this season.

I didn't get to take in Saturday or Sunday at the conditioning camp as there was a family gathering in Saskatoon. This didn't stop me from taking a little bit of time to check out the Saskatoon Ex.

But this year was the limit. One word: Zipper. Yep Megan dragged me on the Zipper. Normally, she isn't that big for rides but since I was panicing it made her more comftorable taking me on the death ride.

In case you don't remember, the Zipper is the one where two of you are standing in this cage that spins freely forwards and backwards while it goes up and down and around.

We must have flipped all the way around eight or nine times. You would have heard my screams all the way back in Kindersley. 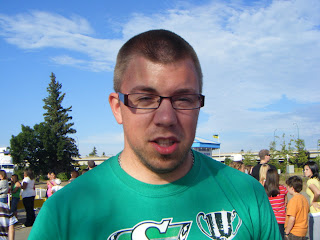 The Beijing olympics are now a few days old and to be honest with you, I haven't really had a chance to watch a whole bunch yet.

Canada is still shutout on the medal front but their best hopes remains on the water in rowing. They are through to the final of the men's eight on Sunday.

American Michael Phelps is hoping to go 8 for 8 at these olympics. He is already 2 for 2 with a pair of broken records. Might be tuning in a bit to see if he can keep this pace going.

With the Klippers' training camp still a couple weeks away and the Riders off for a little while there will be more attention paid to the Beijing games.

The CFL season has been a very entertaining one so far. Just look at the Rider games and you will see that most of them had wonderfull finishes that left you breathless untill the final seconds.

Through this I have really been reading and hearing a lot of comments about how bad some of the broadcasts have been on TSN. Rod Black and Dwaine Ford in perticular. They are an alright team but they don't even come close to Chris Cuthbert and Glen Sutor or the Rider crew on CKRM.

I did read something really cool on rodpedersen.com, however. You can download a program that will delay the audio of the radio to match up to your TV. This way if Black/Ford are doing the game on TSN you can watch and have Rod do your play-by-play.