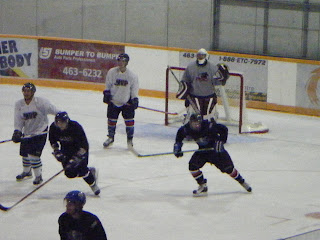 The Klippers opened up their summer conditioning camp earlier today and day one wrapped up with the black/white inter squad game.
This was a close one. Jordan Braid tied the game with five and a half minutes to play and scored the go ahead goal a minute and half later. Team black won the game 5 to 4.
The level of play looked good. There were some big saves, some big hits, goal posts and a good chunk of parents, scouts and coaches in the stands.
Camp resumes tomorrow morning bright and early with fitness testing starting at 9am. The second inter squad game will go at 4pm.
Tomorrow we’ll look at some of the players who are attending camp.
Hockey’s back! Enjoy the weekend!
Posted at 8/08/2008