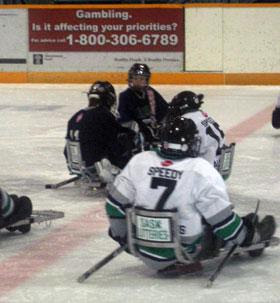 This was found on the Saskatchewan hockey association's website http://www.sha.sk.ca/.

The following is a letter from Catherine Close, coordinator of the Kindersley Sledge Hockey Club.

Our sledge hockey program is going into its 6th season. Our son, Braden, was born with spina bifida. In 2002, we saw sledge hockey on TV at the Salt Lake City Paralympics and Braden said he wanted to play that sport someday. A short while later, we were sitting at a medical appointment when a young man walked by carrying a sledge. We tracked him down and it turned out he was from Bruno, Saskatchewan where they had been playing sledge for a few years, having started it there for a boy with spina bifida. They invited us to come and try it and then lent us a couple of sleds to bring home and show people. We took them to the two elementary schools in Kindersley, along with a video to show kids the sport. Then we commenced the fundraising to purchase equipment that would be held as the property of the Kindersley Sledge Hockey Club.

At the time a sledge and a pair of sticks cost about $500 and we figured that we would try to raise $12,000 to purchase 26 sledges as that was the number of kids we thought we could handle on the ice at one time. The fundraising turned out to be pretty easy. We received a grant of $6,000 from the NHLPA, $2,000 from Saskatchewan Lotteries and the rest we raised by asking local services clubs and businesses to sponsor a sledge at a cost of $500. All sponsorship was recognized by a decal placed on the back of the sleds. I have just recently been told that there is funding of $5,000 available for the equipment from the Canadian Paralympic Committee.

We pitched the sport through a letter sent home to kids and their parents, selling the sport as an inexpensive, less time consuming, less competitive alternative to hockey, great for kids who couldn't skate. The first year, we had 18 kids register. We meet once a week, practicing skills for the first half hour and scrimmaging for the second half hour. Over the years, our registration has varied from 10 to 24 kids and my son has been the only disabled player with everyone else being able bodied. To promote the sport, we have taught sledge hockey as part of the Grade 3 Phys Ed program at Braden's school. We have skated at intermissions of Junior Klipper games. We have had free come and try it skates and an invite-a-friend tournament for our players.

Each year, a highlight for our team is going to the Western Canadian Sledge Hockey Championships in either Edmonton or Calgary where there have been 2 - 4 teams in the Junior Division. In the 2007-08 season, we hosted our first Saskatchewan Sledge Hockey tournament for the Junior Division with teams coming from Edmonton and Calgary. It will become an annual tradition.

We have faced some challenges along the way. It is a worry every year whether we will have enough kids. It was tough to run a program the year we had only 10 kids so we stepped up the advertising. An on-ice challenge is coaching the kids as a group when some have played for several years and some are first year players. It is difficult to meet the needs and advance the skills of the more experienced players. The kids love to play games and we have set some up with the Junior Klippers and with minor hockey teams. We would love to have other sledge hockey teams to play close by.

If you have any questions or if there is something I could help you with to get started, please don't hesitate to contact me, Catherine Close, at 306-463-6371 or at email cclose@sasktel.net.
Posted at 8/12/2008