This and that on a Wednesday afternoon...

We’ll start today with a look into some local hockey players who are making names for themselves.

First, Dinsmore’s Katelyn Ptolemy is currently at York University in Toronto attending selection camp for the national women’s under-22 squad. Dinsmore is part of team Canada White during the camp and they will play team Canada Red tonight. Camp started on August 10th and will wrap up on the 17th.
=====
Now back in July, the 2008 Sask First under-17 camp took place in Wilcox. It featured the top 40 players born in each of 1992 and 1993.

OF the players who attended camp 29 have been placed on the Team West short list and will be evaluated until November 14th when 11 players will be selected to represent team Canada West at the World Under-17 Challenge in Port Alberni, BC.

Rosetown’s Kendall McFaull (defenseman) is on the “watch” list as is Klipper prospect and Saskatoon native Josh Thorimbert (goaltender).
=====

Six local female hockey players have been invited to the female Under-18 fall camp in September.

The players who will be at the fall camp include: (hometown in brackets)

Kirstie Redlick (Biggar)
Brienna Gillanders (Kyle)
Baylee Gillanders (Kyle)
Brittany Erlandson (Outlook)
Courtney Rea (Landis)
Michala Jeffries (Fiske)
=====
Moving on to the Olympics and there is a couple of things to update you on. 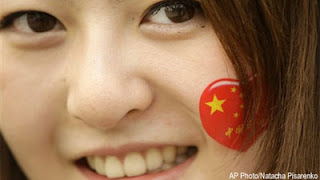 Did you see the opening ceremonies at the Beijing Olympics?

Yep, I said fake. It turns out that the adorable little girl singing ‘Ode to the Motherland’ during the opening ceremony of the games was actually not singing at all. A ceremony official said that the singer, a seven-year-old Chinese girl, was not good looking enough for the Olympics opening ceremony, so another girl lip-synched.

Straight teeth with get you everywhere in China. 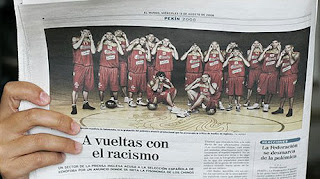 Tisk, Tisk, Tisk. Have you seen what Spain’s Olympic basketball team has done?

Players on the team were shown in a photo ad showing themselves using their finger to apparently make their eyes look more Chinese.

"It was something like supposed to be funny or something but never offensive in any way," said Spain centre Pau Gasol, who also plays for the Los Angeles Lakers. "I'm sorry if anybody thought or took it the wrong way and thought that it was offensive."

I will hopefully have some Jr K news for you tomorrow. Training camp is now only 16 days away!