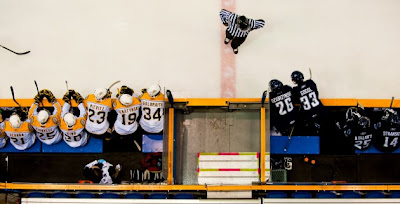 Tonight’s game is the third of eight regular season meetings this season between the Saskatoon Blades (31-9-0-1) and the Brandon Wheat Kings (14-23-1-5). The Blades and Wheat Kings have split the season series thus far with both home teams picking up wins in their respective buildings. The Wheaties blasted the Blades by a score of 7-0 back on October 1st in Brandon in the first meeting between these two clubs. The Blades extracted some revenge two nights later when they topped Brandon by a score of 4-3 in Saskatoon.

Line-mates Curtis Hamilton, Marek Viedensky, and Josh Nicholls lead the Blades scoring vs. the Wheat Kings having picked up 2 points each (1G 1A). For the Wheat Kings, David Toews and Wheaton King have each collected 4 points vs. the Blades this season.

A solid 60-minute effort propelled the Saskatoon Blades to a 5-1 victory Friday night over the Raiders in Prince Albert. Defenseman Stefan Elliott paced the Bridge City Bunch offence with a goal and an assist while "lesser lights" provided the balance of the scoring. Alex Elliott and Darren Dietz...each with their second goals of the season...Ryan Olsen with his fourth and Jake Trask with his 10th sniped for the 31-9-1 Blades who out-shot P.A. 50-26. Former Raider Steven Stanford lost his shutout with 2:42 remaining in the third period when Mark McNeill gave 2,584 fans at Art Hauser Centre something to cheer about. The victory was Saskatoon's sixth in seven head-to-head meetings with Prince Albert this season.

- The Saskatoon Blades made the biggest trade in franchise history yesterday when they acquiredBrayden Schenn from the Brandon Wheat Kings. Schenn along with a 3rd round bantam draft pick in 2012 come to Saskatoon in a deal which saw the Blades send a total of 4 draft picks as well as two prospects (Tim McGauley and Ayrton Nikkel) to Brandon. Schenn joins the Blades fresh off an amazing World Junior Hockey Tournament which saw him tie the Canadian record for points at a tournament with 18. The 2009 1st round pick of the L.A. Kings will not be in the Blades line-up tonight as he will be resting a shoulder injury he sustained at the WJHC.

- Yesterday the WHL announced that Stefan Elliott was named the WHL Player of the Week for the week ending January 9th. Elliott received the honours after picking up 6 points, scoring two goals and four assists to go with a +7 rating, in two games over the past week, helping the Blades to a 2-0-0-0 record in that span. Stefan Elliott is the 2nd Blade to receive the Player of the Week this season as Darian Dziurzynski also received the honour back in October.

- The Blades made one last move yesterday on WHL trade deadline day by re-acquiring defenseman Tanner Sohn from the Vancouver Giants. Sohn, who played 4 games between 2007-09, was acquired in exchange for a 10th round draft pick in 2013. Sohn has played in 64 career WHL games picking up 10 assists and 88 PIM’s.

- Adam Morrison is riding a 3 game winning streak coming into tonight’s game. During that stretch Morrison has surrendered just two goals and has posted a 97.6% save percentage.

- In addition to Elliott’s league leading +33, the Blades have 4 other players ranked in the top 6 in the leagues +/- ratings. Curtis Hamilton and Marek Viedensky are tied for 2nd with +27 marks, and Josh Nicholls & Duncan Siemens are tied for 5th with +26 ratings

- The Saskatoon Blades are sporting the leagues 3rd most potent offense, having scored 156 goals in 41 games this season. Led by Darian Dziurzynski and Josh Nicholls with 19 goals apiece, the Blades line-up boasts 5 players who have scored 15 or more goals this season.