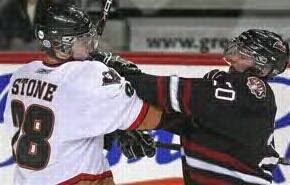 By Cory Wolfe, The StarPhoenix
 

The sentence is the second-longest in the WHL this season.

Cowen's suspension was amplified by his status as a repeat offender.

During last spring's playoffs, he was suspended four games for bowling over Blades goalie Steven Stanford.

The Blades responded to Cowen's actions in that game by instigating a line brawl and the WHL subsequently suspended Blades coach-GM Lorne Molleken four games, and four Saskatoon players served a total of 14 games.

Last Saturday's game was the first time that Cowen faced the Blades since the playoff melee.

With 31 seconds left in the second period, he dropped his gloves at centre ice and punched an unsuspecting Elliott well away from the puck.

Cowen was assessed a major penalty and a game misconduct, while Saskatoon's Nicholls was also ejected for being the third man in.

Saskatoon went on to win the game 7-3.