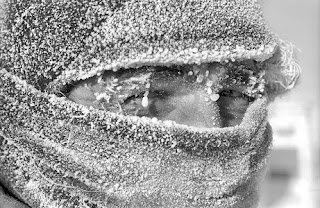 You might want to plug in the car this morning as extreme wind chill values of near minus 40 are forecast.
Environment Canada has issued a warning that extreme wind chill conditions are expected or occurring in the region this morning. Frigid Arctic air combined with brisk northerly winds will generate extreme wind chill values near minus 40 in the British Columbia Peace River region this morning.
Cripes it's cold this morning! It was -36 when I drove to work this morning at 5am.
=====
Residents in Chetwynd are still getting used to having 2 sets of traffic lights. Yesterday on my way back home from a quick drip uptown one man in his truck went right through a red light traveling down the highway. He was almost hit by vehicles coming from both sides who had a green light.
=====
Saskatchewan's Stephanie Lawton continues to roll at the Scotties Tournament of Hearts in Victoria. After starting 0-3 Lawton won her 6th in a row last night 10-4 over New Brunswick. She is now tied with Team Canada for 2nd at 6-3. BC's Marla Mallett is alone in first place at 8-1.
=====
The Senior Boys 3A Zone basketball tournament gets underway today at noon in Prince George with the defending champion Kelly Road Roadrunners tipping off against the fourth seeded South Peace Penguins. The Prince George Polars take on the North Peace Oscars in the second game.
=====
And it’s another off day in the NWJHL playoffs.

The Dawson Creek Jr. Canucks are getting set for game 4 in Grande Prairie on Friday night. It will be do or die for the Canucks who trail the best of 5 opening round playoff series 2 games to 1.

Elsewhere the Fort St John Huskies resume their series with the Slave Lake Wolves on Friday night in Fort St John. The Huskies and Wolves split the first two games in Slave Lake.
=====
More to come as the brain begins to warm up.
Have a great morning!
Posted at 2/26/2009