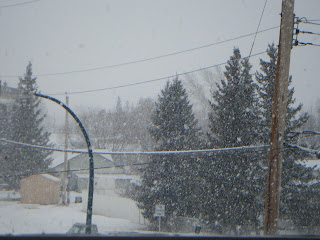 We'll start off this mornings blog post with some observations as I watch the Sportscentre morning loop.

What is happening to the world today? A rare soccer goal was the Sportscentre 'highlight of the night.' Something else that I don't understand: why is every goal on the soccer highlight package a 'splendid goal!' or 'what a goal!'..? I know goals in the sport are rare but come on.

If you caught Coach's Corner on Saturday night you would have seen Don Cherry ripping the Buffalo Sabers and their coach Lindy Ruff for putting Thomas Vanek on the ice late in the game. Vanek already had 3 goals and the team was up 3-0. Cherry said something along the lines of 'the hockey gods will come back and get you. Don't run up the score!.' Again, that was roughly translated.

It's a pretty miserable day in the Peace and the roads are taking a beating. Be careful. There has already been a few accidents on the highways.

The Battle of the Boarder goes tonight in Dawson Creek at the Encana Events Centre. The Calgary Oval Extreme play the US Women's Selects. This is the first of four games in this year's series and it'll be a good one. Get your tickets fast. They have sold out every event and this is year 4. I'll be there, will you?

I've watched the morning loop 4 times now and I think that's a sign to get out of bed and accomplish something today.

Perhaps the reason that every goal in a soccer highlights package is "what a goal" is because it is a highlights package and therefore all the goals are the nice ones that were scored? If you don't like Football and don't watch it and therefore no absolutely nothing about the sport maybe don't comment on it. Plus aren't you a broadcaster? What should the announcer say during a match when a goal is scored? Aren't you supposed to be excited and represent the excitement in the arena or stadium?

I don't agree with this ridiculous "don't run up the score" thing in North American sports and Hockey in particular. These are grown men. If you can't take getting your ass whipped don't play. There is no such thing as karma and Vanek didn't get hurt because he was out there in a game when his team was up 3 zip. It was coincidence. Aren't players supposed to play for a full 60 minute effort? Run up the score. The people in the stands paid good money to see a game and you should provide them as many goals as possible. Don Cherry hasn't been relevant in 10 years and he is part of what is still wrong with the NHL. Screw tradition and all that nonsense you should be doing whatever possible to provide a good experience for your fans. And that means goals.

I just don't understand soccer or "football." I don't disagree with the fact that it's one of the most popular sports in the world. Just look at how many people show up to the stadium. And yes, if I was broadcasting the game I would make each goal sound like it was the greatest goal in the world and I would do that mostly because I wouldn't know if I would ever call another goal, not because it's THAT good. On TV they show EVERY goal.

There is nothing wrong either with playing for 60 minutes and playing hard. Nobody should take s shift off and no team should say "take it easy boys we're already ahead by 3". That's rediculous. But the point that Don Cherry was making was that it was Lindy Ruff who could have played 4 lines instead of trying to pad Vanek's stats. It wasn't about running up the score. Goals are great and let's see every guy get some.

Interesting take on "soccer." I am not sure why you put Football in quotations. I mean of the two sports calling themselves Football only one uses their feet 99 percent of the time. And believe me they don't show every goal. Every Saturday in England alone there are 4 professional leagues that play. Not to mention 8 to 10 pro and semipro leagues below that. The sports channels over here only show the highlights of one or two games a weekend when probably 200 matches are played in England alone. The reason so many of the goals they show are great goals is because they are showing highlights of the top teams like Manchester United and those teams score a lot of beautiful goals.

In terms of Lindy Ruff rolling 4 lines I can't argue with that although most teams these days seem to roll 3 lines but how do we know that he wasn't rolling 4 lines and it was Vanek's turn to come over the boards? Is there any proof anywhere that Vanek was being double shifted? I haven't seen it if there is.