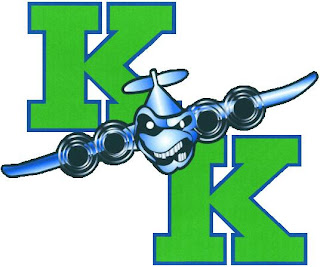 Great opening line in this week’s Clarion from sports reporter Kevin McBain: “Are you ready?”

So with the Klippers set to open up camp tomorrow morning at the WCEC this will be a post about what to expect, and who to expect.

First let’s look at who’s eligible to return to the team.

In goal both Ryan Nieszner (88) and Matt Weninger (89) are eligible to return to the team and would be a great duo to build off.

Now, from those eligible returning players there are a few who won’t be back with the hockey club this season.

-Matt Weninger (89 G) has decided to play with Omaha in the USHL this season and won’t be back with the Jr. K’s.
- defenceman Matt Olson has decided to hang up the skates and has applied to the U of S.
- defenceman Scott Linnell doesn’t appear to be returning and will most likely have surgery on his injured leg.
- forward Jeremy Beller is also hanging up the blades and has been accepted to McGill University.
=====

Five goaltenders twelve defensemen and up to 27 forwards could be attending camp this weekend. Now that is subject to change with 16 players competing in WHL camps and may or may not be back for this weekend.

Here are some new faces you may see at camp this weekend:

Evan Durnin – 1989-born forward from Brandon, MB. Durnin was at the K’s conditioning camp earlier this month and may add a bit of energy and be a good depth player.

Taylor Duzan – the 1991-born Duzan had 22G and 20A last season with the Saskatoon Blazers. He stands 5’4” 165 but won’t be afraid to throw his body around and muck it up in the corners. Duzan will bring some offence and a ton of energy to the klippers 3rd or 4th line. He seems like a prototypical Larry Wintoneak type of guy. He’ll go to the wall for you any day of the week.

Andrew Dommett – Signed in the offseason by the Klippers. He made an appearance as a call-up with the club last season and becoming a full time player this year should be a seamless transition.

Kurt Leedahl – 1990-born forward and brother of Brett Leedahl is another Leedahl speedster. Kurt spent some time on the blue line during the conditioning camp and we may see him play a bit of that this season.
Stephen Mussell – 1989-born forward from Westbank, BC. The 5’10” 168lb Mussell played in 45 games with the Summerland Sting (KIJHL – Jr. B in BC) notching 23 goals and 22 assists with 103 pim.

Andrew Kuechler – 1988-born centre from Lomira,Wisconsin. The 5’9” 170lb Kuechler might be the player to watch in camp. With 2/3rds of the Klippers top line graduated, coach Wintoneak may have found a suitable replacement in the veteran centre man. In 15 games with the Bozeman Ice Dogs (NOR PAC (northern pacific hockey league)(United States based Jr hockey league)) Kuechler had 14 goals and 9 assists for 23 points and added 18 penalty minutes.

Myles Jeffers – 1988-born defenseman from Saskatoon. Listed as 5’8” 180lbs hockey db shows he played 5 games with the Notre Dame Hounds (SJHL) last season with zero’s across the stats board. Kevin McBain has in the Clarion this week that Jeffers was on a lacrosse scholarship at New England College. I’ll have to have a chat with him to get his story.

The first inter-squad game will be Friday morning at 11am at the WCEC. Games will be two 25 minute straight time periods with the last 2 minutes stop with a flood between.

I’m really looking forward to camp. Also a reminder to check back tomorrow on the blog for some big news from this blogger.