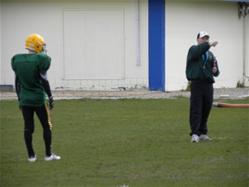 2010 THE HOME DEPOT NFL YOUTH COACH OF THE YEAR

Toronto, ON – November 16, 2010 − The National Football League today named John Svenson as the 2010 The Home Depot NFL Youth Coach of the Year.

The football program at Melville Comprehensive School will receive $5,000 in new football equipment as well as a $1,000 The Home Depot gift card for football related renovation projects - such as field repair, fixing bleachers, painting locker rooms, etc. Team Depot, The Home Depot’s associate volunteer force, will also be available to offer hands-on support for the projects.

“John Svenson has had a positive impact on a lot of young football players in the province of Saskatchewan , and we’re proud to recognize that,” said Mike Danischewsky, Football Development, NFL Canada. “He is a coach who exemplifies everything our award represents; a long-term commitment to coaching that goes beyond the win-loss column and strengthens the sport in his community.”

In addition to leading the football program at his school, Svenson also helped develop local Parkland Pee Wee Football and coaches the league’s Melville entry. Svenson was selected from a shortlist of ten community and high school coaches from across Canada to receive the honour. More than 100 coaches from across Canada were nominated for the award. Svenson has been invited to Quebec City as a guest of the NFL for this year’s Desjardins Vanier Cup celebrations, and will be honoured at the CIS Coaches breakfast on Friday, November 26, 2010.

“John Svenson been volunteering his time and effort to the school’s football program for the past 18 years (coaching, repairing equipment, keeping the field in shape) while also helping us as a Guidance Counsellor and Shop teacher,” said Walchuk. “In the summer months he helps coach Team Saskatchewan and organizes games with teams from the United States . If you can find someone that does more for football in their community then hats off to you, because in my opinion there isn’t anyone that does as much as Coach Svenson does for Melville.”

Football players, volunteers, fans, administrators and fellow coaches submitted short essays recognizing the positive impact a youth football coach has had in their community. Nominators were asked to consider how their coach taught respect, safety, motivation, leadership and appreciation for the game of football when drafting their nominations. A panel of journalists and NFL officials selected the winner.

Mount Royal Collegiate’s Patrick Barry ( Saskatoon , SK ) was named as a runner-up and will receive $2,000 in equipment and a $500 The Home Depot gift card. The former Saskatoon Hilltop and University of Saskatchewan Huskie was nominated by Brandon Leatherdale, a fellow teacher and coach at Mount Royal .

“Pat teaches his players respect for the game, their opponents, their coaches, and most importantly, themselves,” said Leatherdale. “While Mount Royal is far from a juggernaut in football circles, the team plays as hard as they can each and every week. Pat’s tireless work ethic, enthusiasm for the game and ability to make young men from some of the poorest homes in the city into fine people and athletes motivates me and the rest of the coaching staff to do our best each and every day.”

Dr. Matt Mortenson, a chiropractic physician and volunteer coach at Edward Milne Community School in Sooke, B.C., was also named as a runner-up and will receive $2,000 in equipment and a $500 The Home Depot gift card. One of the several letters nominating Mortenson was submitted by football mom Caledonia Robertson.

“Since 2003 Matt has dedicated limitless hours to coaching community football in Sooke, and then began a football club for the high school students of Edward Milne Community School ,” said Robertson. “Over the past three years I have witnessed my son’s self confidence and fortitude develop enormously. I believe that his experiences training for football are what now motivate him to make healthy choices, to pursue excellence in his studies, and to have the courage to pursue his dreams.”

Over the past twelve years the program has contributed more than $140,000 in equipment and facility upgrades to deserving programs, and put the spotlight on the grassroots-level coaches who are the backbone of football in Canada .