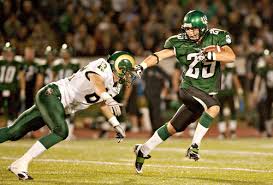 (from the Huskie Outsider)

Head to head history: Saskatchewan has 12 regular season wins to Regina’s four since 2000.

What’s on the line: The Rams want to keep momentum and win at home in their quest to prove the Canada West coaches wrong. The pre-season Canada West coaches pollranked the Rams fifth of six in the conference. The Rams were offended by this, thinking their recruits along the defensive line improved the team significantly, and enjoyed success with a blowout win over Manitoba in week one before losing a close game to Calgary (who were without the services of All-Canadians such as Erik Glavic, Anthony Woodson and Andrea Bonaventura). All-in-all, this has been a very positive start to the season for the Rams and they would like to continue this with a win over their provincial rivals.

The Huskies need to get back on track, and nothing would help this more than a win in Regina. They found out the hard way last week that there are no easy games or sure wins on the schedule this year, and if they are to repeat their first place finish from last season and live up to expectations, they will need to win decisively in Regina.

Key players: Ben Coakwell will be the Huskies’ starting running back for the next couple of games, and he has earned his playing time. In each of the first two games this year, Coakwell has eclipsed the 100 yard mark and currently sits third in the Canada West with 213 yards and first in average yards per carry amongst running backs with 8.2 yards. Jade Etienne leads the receivers with 119 yards receiving and one touchdown through two games, and his speed and tremendous hands give the Huskies yet another deep receiving weapon. Saskatchewan’s mid-range possession game is also strong thanks to the strong play of Garrett Bolen, who is second on the team with seven catches, most of those in the middle where he is difficult to defend and even more difficult to bring down.

The Rams defence has played well in their first two games, with the replacements for departed veterans Thomas Irving and Brandon Ganne, Chris Scoig and Steve Famulak, proving to be the most important additions to the Rams front seven. Scoig is tied for fifth in the conference with 13 tackles while Famulak, who is deployed as a dimeback or rover similar to the way Nico Higgs is used with the Huskies, has a conference-leading 3.5 sacks after two weeks. Former Huskie Matt Yausie leads the Rams with 15.5 tackles, 12 of those coming in the previous game against the Dinos.Daniel Knaus has taken over from Jeff Lukomski at cornerback after Lukomski broke his collarbone in the game against the Bisons and has an interception and 5.5 tackles to show for it.

Defensively, the Huskies will provide the Rams with a much stiffer test than they have faced in their first two games this season. The team speed is excellent, from the defensive line on down, with players like Zach Hart, who has 10 tackles, including three for a loss, and Joel Seutter, who has 8.5 tackles, including 1.5 for a loss, constantly in the offensive backfield. Levi Steinhauer provides even more speed off the edge, with two of his three tackles so far being for a loss. Linebackers Tony Michalchuk, with eight tackles, and Nico Higgs, with nine tackles and one forced fumble, are disruptive to the pass and quick to the ball on draw plays. And one player who gets little notice but impresses every time he is near the ball, is cornerback Cody Halseth. In two games, he has two breakups, two passes defended and 6.5 tackles, including one for a loss.

The Rams offence is pass happy, as they usually are. Fourth-year quarterback Marc Meuller leads the Canada West with 530 yards and two touchdowns through two games, while his top target, slotback Brenden Owens, has conference-leading 214 yards and caught both of those touchdowns. First year slotback Rory Copithorn has been a regular contributor to Ram’s passing attack and sits tenth in yards received at 98. Surprisingly, the Rams have displayed an ability to run the ball, as well, with new running back Adrian Charles, the former Saskatoon Hilltops star who has gained notoriety on and off the field, sitting second in the conference with 218 yards and two touchdowns.

Roster moves: The Rams come in relatively healthy, with the only major injury thus far to starting cornerback Jeff Lukomski. Slotback Jared Janotta also broke his collarbone in practice and will not be available.

The Huskies will be missing several regulars including centre Darren Hinds (ACL) and slotback Jeff Moore (collarbone), who are lost for the season. Fullback Alex Balogun has a broken leg and will be out indefinietly. Linebacker Peter Thiel (broken hand) and running back Jeff Hassler (bruised heel) will be sitting this game out, but are likely to return against Alberta next week or Manitoba at home. Dathan Thomas (broken fibula) is close to starting training.

Key matchups: The Huskies passing game will include something the Rams have not seen so far this season: a quarterback not making his first start in the CIS. After facing Manitoba’s Khaleal Williams and Calgary’s Eric Dzwilewski, fifth-year veteran Laurence Nixon will be a bigger challenge. Nixon will be looking to rebound from a bad outing last week and has a healthy set of veteran receivers to throw to. Slotback Braeden George had two huge games to end the season and begin the playoffs against the Rams, putting up 215 yards and three touchdowns in those two games. Rory Kohlert, Jade Etienne and Garrett Bolen, all Regina natives, will all want to put on a good show in their old stomping grounds. They will be facing a Rams secondary that dominated its first week, with four interceptions (including two that went for touchdowns) and kept the Dinos off the board for almost the entire first half of last week’s game. The second half of that game saw the field open up for the Dinos when the Ram’s pass rush lost steam, however, with Calgary putting up many yards through the air on the Rams. It will be interesting to see how the Huskies inside receivers play against veteran safety Matt Yausie, who was moved to the position when Kirby Kezama was moved to halfback.

The other key battle will be along the line of scrimmage when the Rams have the ball. The Huskies currently sit last in the conference with one sack after playing games against Eric Glavic and Billy Greene, who both run and scramble as well as they pass. While Meuller presents less of a threat to run, getting to him could be tough, as the Rams have a big and experienced offensive line that includes tackles John Hashem and Chris Mercer. The Huskies are due for a breakout and will put some big pressure on the Ram’s quarterback as the speed of the defensive ends and linebackers are more than the Rams have seen from their opposition so far. Even with Thiel out, the Huskies should be on their game and will be up to the task of disrupting the Rams offensive plans. After watching the tape from the past two weeks, don’t be surprised if the Rams give Meuller the green light to rush if things open up in front of him or on an option play. The Huskies should be ready for this and may even benefit from a coverage sack or two.

What to expect: Take what you’ve seen from the first two weeks of the season, throw it out and forget about it. For all intents and purposes, it was still preseason and teams should now start to show their true colours while the surprising results from across the conference should be less frequent.

An effort like last week’s will lead to certain defeat for the Huskies, as the Rams will be prepared and will be on top of their game, as they usually are against the Huskies. The Rams would love to show they are for real, and one of the best ways to make a statement is to beat the Huskies, who are usually the favourites when these teams meet. The Huskies know the Rams will be pulling out all the stops to beat them, especially after their terrible game against UBC, and they realize all eyes are on them, waiting to see if they are the team that beat Calgary or the team that lost to UBC.

A lot has been made of the Ram’s defensive line recruits, and through two games, they seem to be better. They’re not the forces of nature many made them out to be and although they are good athletes, they shouldn’t expect to dominate the Huskies offensive line, which has some large, elite athletes in its ranks, as well. There will be some solid battles along both lines of scrimmage, but this is an area that favours the Huskies, as they have the balance of experience and depth between the clubs.

This game should be much closer and could be a back-and-forth battle for the first half or first three quarters. The end result could hinge on special teams play, something the Huskies struggled with in the wet and windy conditions last week, but excelled at in the wet and windy conditions the week prior. The Rams have yet to have a good game on special teams, returning the 17 balls punted to them in the first two weeks a combined 79 yards. They also gave up a 76 yard punt return for a touchdown in last week’s game, and gave up an average of 18.2 yards on 10 punt returns. This is an area the Huskies worked on during the week in the hope of returning to the form they showed in Calgary, when they returned 13 punts and kickoffs for 268 yards.