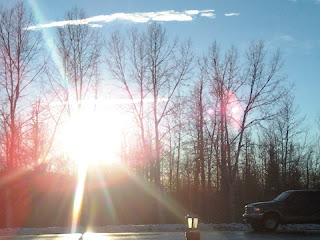 It was +2 this morning when I woke up at the George Dawson Inn and this afternoon it has climbed to +7 on the thermometer. I'm really enjoying this and it seems like it will last for the rest of the week/weekend.

The game last night was a tough pill to swallow. On one hand the Canucks came out very hard and really took it to the Wolverines for roughly 31 minutes. After that, well I think you know the rest. Five straight goals from the visitors really sunk the boys and they couldn't recover.

I think that Whitecourt is a beatable team but it will definitely take 60 minutes. Last night proved that teams in this league can play with the Wolverines and Dawson Creek can be successful. That is a really good sign.

Reid Smith and Charles Radke played phenomenal last night. Smith set up the goal from Canuck captain Tyson Keen on a beautiful pass from the side boards. Radke was tough to contain all night and I can't wait to see these two play in this Saturday's all star game.

The quote of the night goes to a gentleman I met in the lobby.

I was in line with Megan as she was purchasing her hot chocolate and this gentleman says to me "you must be from the Yukon making her pay for it. That's how they do it up there in the Yukon."

Apparently they make the women pay in the Yukon. I wouldn't know but doesn't that sound like a good idea? All joking aside there was another candidate for quote of the night.

Another great quote from Wednesday night:

"There isn't enough money in this town to pay for one of my sticks." -Wolverines' Rod Lavoie to the Dawson Creek fans after losing his stick in a scrum late in the third period.

I'm a little disappointed in Brandon Anderson of the Wolverines although I don't blame him. Late in the game Reid Smith was looking to drop the mitts and Anderson politely declined the invitation after Smith had dropped the mitts.

Anderson wasn't looking to fight or to get involved with anything late in the game and that's fine. I was just hoping to see two big boys go at it. Purely for an entertainment purpose.

More information on the all star game in a bit and a little more to add. For now, enjoy this wonderful weather!