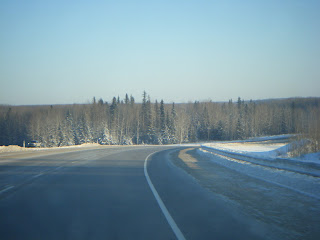 The long trip back to Saskatchewan is complete. We drove pretty early in the morning which meant that most of the trip was spent dreaming. I was out the second we hit the road.
My apologies as I probably wasn't the best (oh what's the word I'm looking for?) road trip buddy. When I don't sleep I get a bit grouchy. But let's just say I told you so! Ok I didn't want to bring it up again but man am I good when it comes to directions. (I'll pay for that comment soon I'm sure.)
=====
I filled up for 68.9 cents/litre in Camrose, AB. 68.9! As a kid the lowest price of gas that I remember seeing is 59.9 cents/litre. The image of the Shell gas station with those numbers on it is etched in my mind. Will we see gas prices drop below that number soon? I, for one, hope so.
=====
It was -45 with the wind chill in Dawson Creek Sunday morning at 3am. That's about the same time we woke up to leave in Whitecourt. All day there was a wind chill warning back home. Happy holidays! It was even -36 or so in Kamloops.
Not nearly as much snow in Saskatchewan right now as back in the Peace region. I was hoping to get in a snowmobile ride on this trip but it's looking like that won't be the case. Anyone with a sled want to go in early January?
=====
Haven't heard what time the Canucks pulled into Dawson Creek after the game in Whitecourt Saturday night. They were delayed in leaving as there was an issue with the bus. All I know is that it wouldn't start, after that my knowledge of mechanics and the situation is a blur. Hope the boys made it home safe and didn't have to stay the night.
Speaking of staying the night, we had a little confusion with our hotel in Whitecourt. Checked into one of the local hotels and as we entered our room we found that we weren't the only ones in there. So we thought. The room was very small and looked like a bachelor had been living there for months! Needless to say we went to another place. The Quality Inn was great and we found a room at the last minute and had a great stay. Thanks!
=====
PG Cougar Dana Tyrell's stint with Team Canada is over. The dynamic forward suffered what is being called a serious knee injury and his tournament is over. Vancouver Giant's forward Evander Kane will take his place on the team. Hope that Tyrell isn't out of action for too long.
=====
Big thumbs way up to the Chetwynd Public Library's Books 'n' Bites Cafe. They put on a wonderful spread for the Peace FM/Chetwynd Communication Society/Thrift Store Christmas party. Great food, lots of laughs and even some gifts. Not bad all around.
=====
Did I call it or what? My Tennessee Titans locked up home field advantage throughout the AFC playoffs with a big victory over the Pittsburgh Steelers. I also recall saying on the broadcast Saturday night that the Seahawks would upset the Jets. Spooky. Maybe I'll start doing some NFL locks. Look for that to come on the blog.
=====
Time for some sleep. Big day of visiting ahead.
Happy holidays!
dd
Posted at 12/21/2008

Between you and the dog, i have no idea who snores the loudest. Nice blogging, i take it you needed to sleep the whole way home so that you could be rested up to eat and blog.